Sundar Pichai’s approach That Will Change Your Perspective Towards Work 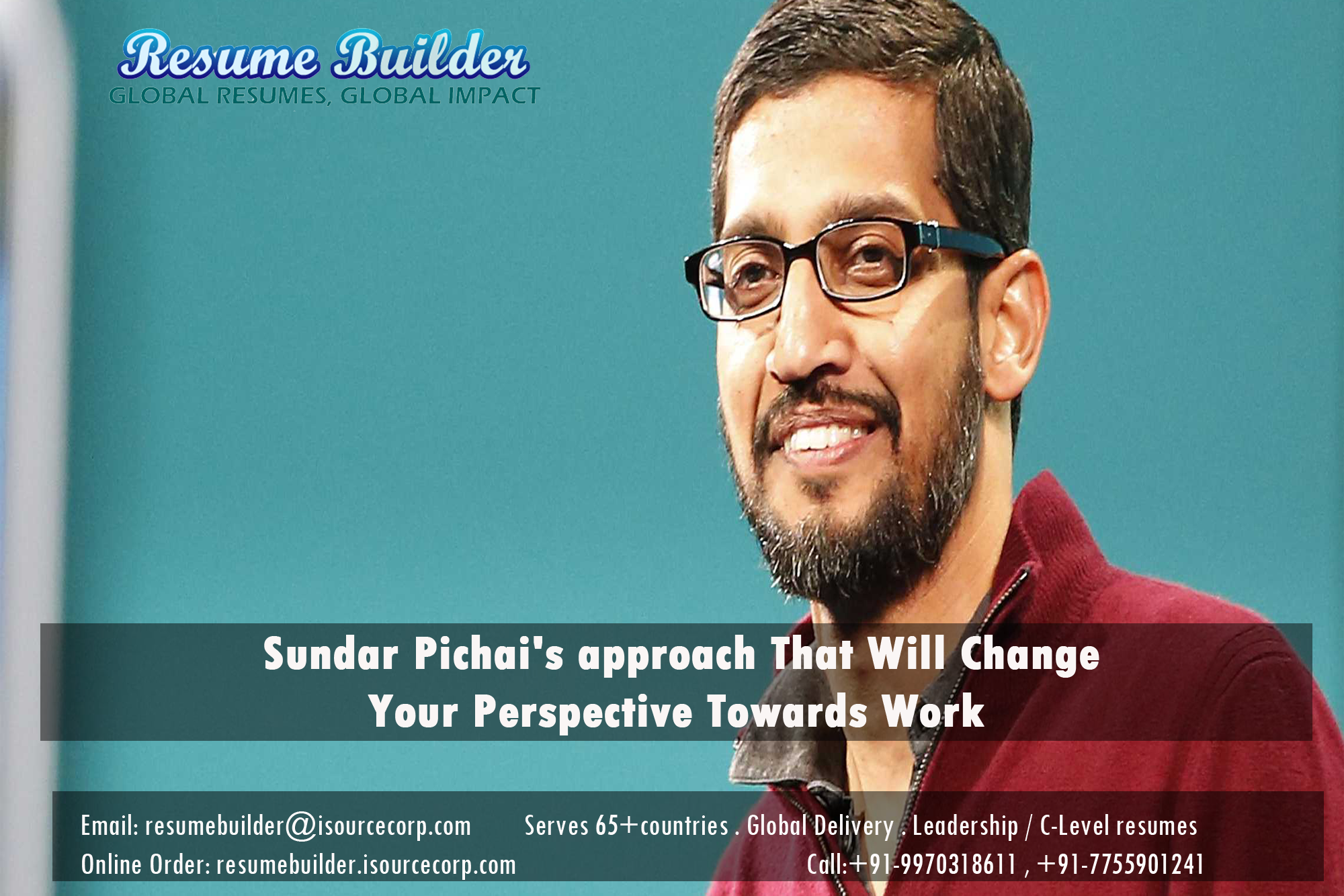 Less than four years ago, very few people outside of the tech world knew about Pichai Sundararajan, or Sundar Pichai, as he is more well-known. At one time, he was just a middle-management Googler, working as a Director of Product Development. It all changed in 2015, when Google announced that Pichai would be the leading man for all products, and the company itself. Things changed overnight, and Pichai was brought into limelight.

Today, the IIT-K – Stanford – Wharton graduate is leading the tech giant’s flag from artificial intelligence, to virtual reality; from home automation to driverless cars. The man has been much appreciated for his dedication to work, innovation, and driving teams to achieve their best. It is therefore, no wonder that he is an inspiration to millions, and individuals look up to him as a true people’s leader.

A former Google employee, who started working a year prior to Pichai, who started in 2004, notes that “Even though Pichai was smart and capable from the get-go, NO ONE would have guessed he would end up as the company’s second-in-command. He did not have an obvious flair or overwhelming charm.” So, what is it about Pichai that people find hard to resist from working for/with him?

Most of the people who are working for or have worked with Pichai vouch for his empathetic nature towards his employees. They say he actually cares about the people he works with, and is very supportive. They claim that Pichai works towards building a team rather than simply hiring people. He emphasizes on hiring or promoting the best, meritorious, and deserving people, as opposed to people who are opportunistic and political in nature, says another Googler. People want to transfer to his organization, since he has developed a reputation of being so enjoyable to work with, which stems from his ability to create and build strong teams.

There are many tales to Pichai’s supportive and motivating persona; one former Googler mentioned on Quora that while Sundar was heading the Chrome project, he visited the Mountain View office of Google, quickly introduced himself to Pichai, not thinking it would go beyond that. Not only did Sundar show an interest in his work, but went on to appreciate him for the contributions he was making towards making Google better than its competitors, even though the work was a small piece in the bigger puzzle. Another former employee notes that Pichai was one of the best people he’d worked with, adding that when he decided to leave Google for a start-up, Pichai was incredibly supportive and offered to help in any way he could.

Another aspect to Pichai’s leadership is how seamlessly he interprets Larry Page’s vision, presents to different teams, and collaborates with them to realize the dream. Once, there was a planning meeting at Google with a group of VPs and Directors from across products to discuss several secret projects, and they were all bickering. Page walked in, talked about abstract concepts and big ideas not related to the pre-set engineering roadmap, and introduced aspects the teams hadn’t expected even in their wildest thoughts. The entire room plunged into shocked silence, and Page walked out without getting a single question. Seconds later, Pichai walked in and simplified everything for the team. Post meeting conclusion, he talked to all teams individually, and helped them understand the future roadmap on which they were to proceed together.

Sundar is also noted for his amicable nature, humility, and sheer brilliance. Not only is he able to connect effortlessly with a wider age group, he is also able to integrate and bring together people from different disciplines, and make them work towards the collective good of the whole company, including the business side. He prefers to sit down one-on-one with people, explain the strategy, and get them on board. While Google has politics like any other large company, Sundar has waded through those to make his team successful while rendering the least possible damage on any other team. He is widely regarded as an efficient problem solver and knows how to get the best of everything, without disregarding anyone’s idea completely.

A story on Sundar Pichai’s collaborative nature goes on tell that he is the kind of leader/manager who would sit and quietly listen to what everyone had to say, and then deliver an idea that could work for everyone. Such are his people orientation abilities, that he has been lauded for his opinionated nature, while providing others the opportunity to present their ideas before delivering his own opinion.

Additionally, Pichai has a great regard for quality work, focus, and results, and deals with it through a “substance over overt style” attitude. Combine that with his high people orientation and task orientation approach, Pichai has clearly succeeded in becoming a great CEO of a great company. As a Quora user pointed out, “competence can be gained in an IIT or IIM or Wharton, or literally anywhere with the right attitude; but when that meets high consciousness/awareness of people and happenings around – magic happens.” I believe, Sundar Pichai is a living example of the magic reaped through perseverance and empathy.