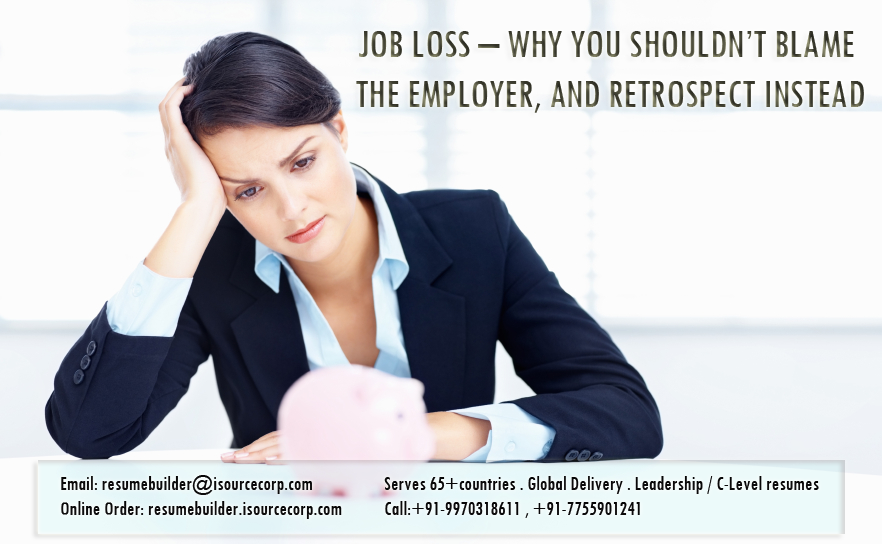 Job Loss – Why You Shouldn’t Blame The Employer, And Retrospect Instead

“You’re fired” these words spell dread for any working individual, and bring with them a flood of emotions. One of life’s most stressful experiences, losing a job brings an apprehensive feeling for an individual, with questions and anxiety regarding what the future holds for them. While most people stress out and start blaming the company/employer for the situations, only a few truly delve deeper and retrospect as to what went wrong, and why they were let go.

The stress associated with a job loss can be quite overwhelming, and has the power to knock off an individual’s self-esteem and sense of purpose. Instead of dusting off and rising to become a better version of oneself, most people often resort to the blame-game, finding faults in other people and situations, while failing to look inside of them and resolve the issues or shortcomings.

While it is perfectly okay to lament at the loss of the job, it is very important to remember that a job or a career doesn’t define a person’s identity. Differentiating between one’s self-worth from the job is equally important. Additionally, it is also to be noted that the employer is not always at fault for one’s job loss; perhaps there were errors on the individual’s end that led to their firing from the job. One needs to reconsider, if they knowingly or accidentally, committed those mistakes which led to their subsequent termination from the organization.

Although these reasons may vary from company to company, a few common, collective reasons why someone could get fired are listed below. One can check and see if their firing was due to any of these reasons, so that they do not commit these mistakes again:

The old proverb, “a half truth is a whole lie”, fits perfectly well in any given scenario. Some people resort to lying or telling half-truths to gain employment, such as inflating achievements, skills, or qualifications to appear better than the other candidates. While this may work for a while, it can come back to haunt a candidate in case the existing company decides to go for a thorough background check, and finds out that a candidate has majorly lied on their résumé. While a minor discrepancy in stating facts on a résumé might not be concerning, a major difference in facts might lead to termination of employment by the employer.

While most of the companies are fine with a candidate’s presence on social media during office hours, some companies either forbid it completely or partially as part of company policy, which they ensure is well known to all current and prospective employees. Despite well-versed with this, if an employee knowingly uses social media during office hours or posts sensitive/confidential information without the company’s prior consent, then they might face termination from employment.

In most companies, use of internal assets/property is strictly forbidden for personal usage. If a candidate is found using company assets/property for materializing their own gains, they might face severe punishment, including losing the job with immediate effect.

Theft, misbehavior, cheating, and lying to the company, if discovered, are liable for warranting a job termination on the spot. Additionally, taking constant, longer breaks from work that are unproductive and serve as a useless expenditure for the company might also become a reason for an employer to let go of an employee. Small, well-timed breaks are not a cause of concern; in fact, most companies encourage taking small breaks in between work to allow employees to refresh and work at their peak productivity; but if one is taking regular, extended breaks for most of their office time, then they can be terminated.

Another reason why someone could be fired is prolonged or continuous misstatement of company records and reports. This involves painting an entirely different picture of the company than reality, and constitutes to fraud for stakeholders and general public. This includes inflating or deflating company profits/losses, hiding public information, misleading investors/stakeholders/public regarding the company’s core business or agenda, and more. If an employee is caught directly or indirectly participating in misrepresenting or falsifying company records for personal gains, then they can be terminated on spot.

Continuous poor performance and the inability to follow allocated direction/work can also be a reason for employees to get fired, as no company wants to work with people who waste internal resources and negate productivity. Additionally, serious violations of key company policies can also result in employees being let go of their job.

This is a serious offense; while most companies allow light alcohol consumption during informal company events or parties, almost all of them prohibit consumption or possession of drugs and alcohol within the office premises, as it inhibits and hinders a person’s ability to work and concentrate properly. One can easily be fired on the grounds of alcohol or drug possession in office.

Inflicting serious damage to company assets and property intentionally can also be grounds for termination. While unintentional damage might be let go with a fine or salary deduction, an intentional damage to a company’s property will not only get a pink slip, but might also warrant a police case, if the company deems fit.

As mentioned previously, lamenting a job loss is fine, but before blaming anyone, one should think if the problem lies within, as opposed to outside. If one is guilty of any of the above reasons and has been fired from their respective job, then instead of blaming, they should focus on improving their skills and qualities, and consider not repeating the mistake in a new organization. A job termination is not the end of the world; the skills and qualities one possesses can get them far ahead in life, provided they work on shaping the best aspect of their personality. As such, it is best if one moves ahead with introspection and a promise of a better future for themselves.